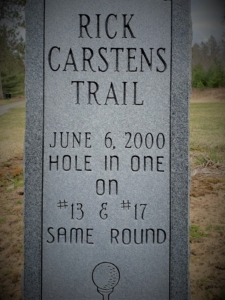 Twenty (one) Years ago, Rick Carstens accomplished the Impossible. On June 6, 2000 he scored two Hole-in-one’s in a single 18 hole round. Not only that, but he also managed to cram both of them in on the back Nine! In order to properly pay homage to this historical occasion, White Pine National will be giving away $1,000,000.00 for a hole-in-one during the Carstens Million Dollar Shoot-out.